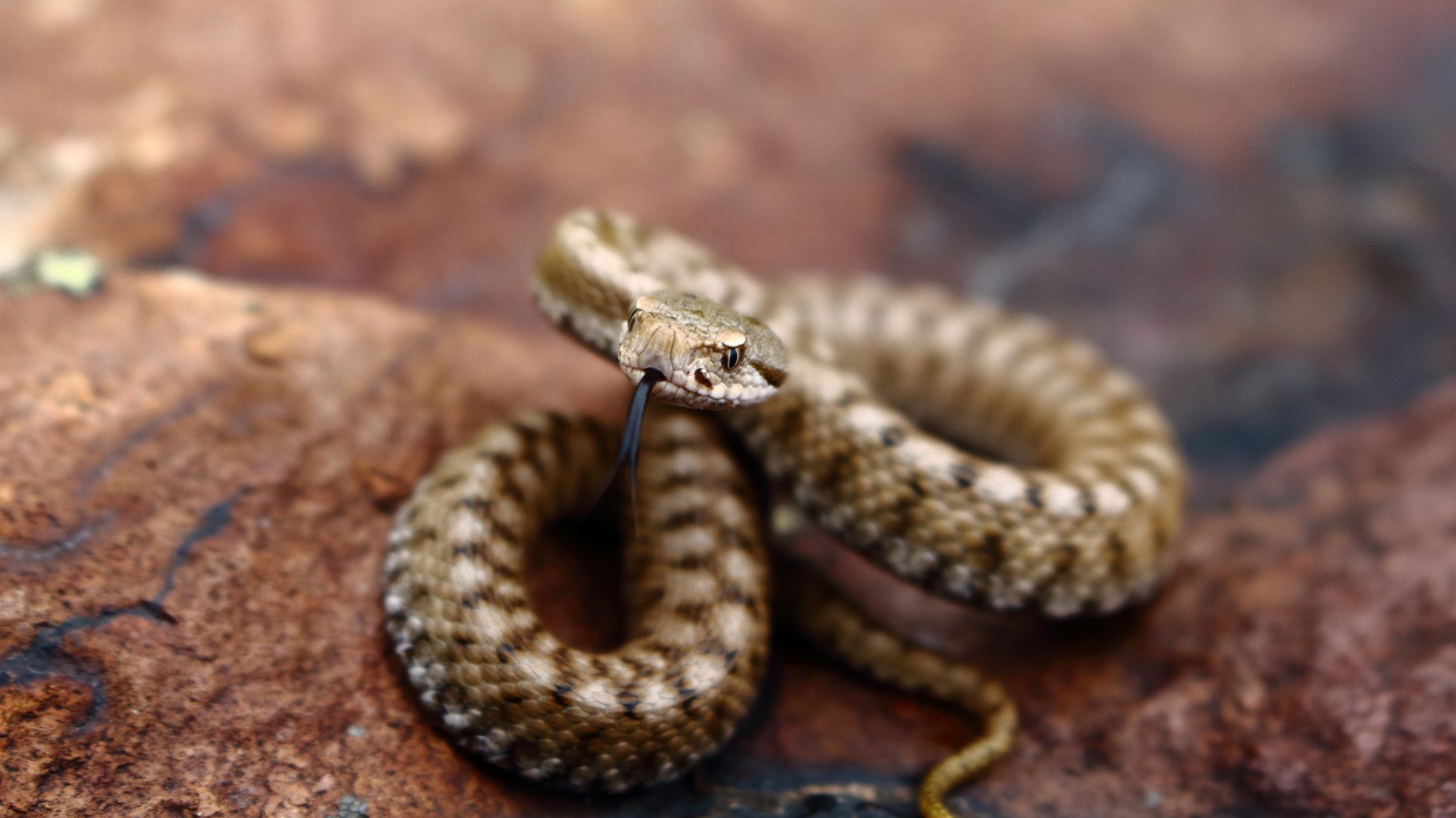 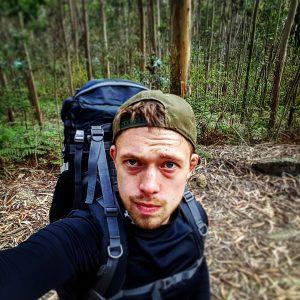 to my webspace. This site is devoted to me and my research that deals with all aspects around “chemical warfare in the animal kingdom”. I am interested in venomous and poisonous animals, their ecology, evolution, biochemistry and their great potential in drug discovery. I am the leader of the junior research group “Animal Venomics” within the LOEWE-TBG consortium. Here, me and my team of researchers from the Fraunhofer IME-BR and Justus-Liebig-University of Gießen aim to unravel the mysteries behind the deadliest innovations of the animal kingdom. We do this as a means to answer fundamental biological questions and, simultaneously, translate our findings into valuable assets – particularly into sustainable bioinsecticides and antiinfectives. This webspace provides an overview upon me as a person, my lab and current research directions. 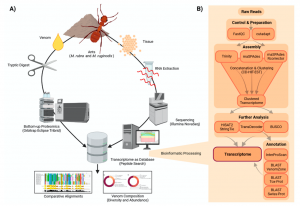 Ants (Formicidae) are outstandingly successful arthropods that are known for traits, such as eusociality or advanced chemical communication. However, ants are also venomous and much of their evolutionary success may be derived from their trophically and defensively used toxin arsenals. In contrast to painfully stinging ants from the tropics, e.g. bulldog ants of the genus Myrmecia or bullet ants in the genus Paraponera, the venoms of Central European taxa in the family Myrmicinae are quite underexplored. In a recent study led by Sabine Hurka, a PhD student in my lab, we analysed the venoms of two myrmecine ants native to Germany (Myrmica rubra and Myrmica ruginodis) via Proteo-transcriptomics. We provide the first description of both species venoms and identify several new biomolecules, including some potential venom allergens. For M. ruginodis venom we report, for the first time, the presence of phospholipases. In both species, we identified sequences with similarity to EGF-like toxins known from bulldog ants. By investigating the evolution of these toxins across formicoid ants, we provide further support for a complex evolutionary trajectory of ant EGF-like toxins that may have been recruited to serve defensive (targeting vertebrates) and trophic (targeting insects) functions.

Illuminating the biology and evolution of spider venoms 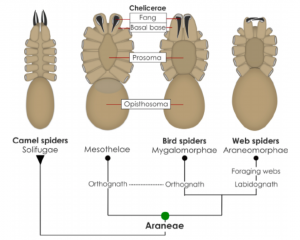 Spiders are ancient and diverse arthropod assassins that utilise their venoms to mount neurochemical attacks upon their prey. As spider venoms are the chemically most diverse venom systems present in the animal kingdom and given their potent  interaction with pharmacologically significant targets, it is unsurprising that they are heavily studied for translational purposes. That said, the biologically relevant aspects of spider venoms remain largely overlooked in comparison. In our most recent article, we set out to summarise on these neglected aspects relating to spider venom biology and evolution and thereby provided a state of the art overview on this topic. We provide a roadmap to spider venom systems, outline recent developments gained by application of multi-comics and emphasise current knowledge gaps. The most important insight gained from our analysis is, that spider venoms are much more complex and flexible as previously thought. The chemical landscape is dramatically altered by environmental and intrinsic cues and the powerful bioactivity is often based on synergistic interactions between the different biomolecules rather than being derived from a few dominant compounds. Also there seems to be an ancient connection between the venom- and the silk systems that needs to be investigated in the future. 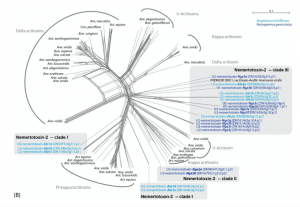 Ribbon worms of the phylum Nemertea are toxic lophotrochozoans often inhabiting marine environments. In this recent project, my colleagues and I studied the venom system of the hoplonemertean Amphiporus lactifloreus, a species that evolved a venomous stilett as an predatory asset. Via Proteo-transcriptomics we investigated the defensive poison and the predatory venom of the species and found a considerable overlap between both matrices. Mucin proteins and an array of proteolytic enzymes are present, while some known nemertean toxins (such as Nemertid) could not be recovered. Instead, we identified homologs to actitoxins from sea anemones and plancitoxins from crown-of-thorne sea stars in A. lactifloreus. The identification of such cysteine-knot peptides, that likely act as neurotoxins, underlines that also understudied marine worms represent promising sources for valuable new biomolecules and need to be investigated in more detail. Based on comparative analyses we discuss moreover the evolutionary history of major nemertean lineages and propose a stepwise evolution from flesh-melting scavengers towards sophisticated venomous hunters encompassing the stilett-apparatus. 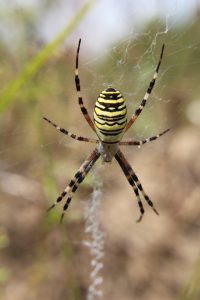 Among all of the venom-wise understudied spider lineages, the family of orb-weavers takes an outstanding position as it represents one of the most diverse, abundant and prominent spiders known to men. In this study, which I had the honour to lead, my colleagues and I studied the venom of the wasp spider Argiope bruennichi as a member of this important family via transcriptome-guided proteomics implementing a dual mass spectrometry platform. We find, that the venom of wasp spiders is unusually simple in its composition and defies the rule that spider venoms are extremely complex and predominantly composed of small cysteine-rich peptides. Instead, the wasp spider venom is dominated by large proteins of the CAP family alongside a subset of novel biomolecules echoing insect-neuropeptides. A re-analysis of the related Araneus ventricosus revealed, that also other araneids harbour a wide variety of CAP proteins in their venom, suggesting an important role of these in orb-weaver venom systems. However, their biological function needs to be illuminated. Lastly, we propose an eco-evolutionary scenario that may have given rise to the remarkable venom in wasp spiders. Perhaps the silk-based hunting strategy that is utilised by wasp spiders competes with the venom system for metabolic resources thus leading to subsequent reduction of the venom system. 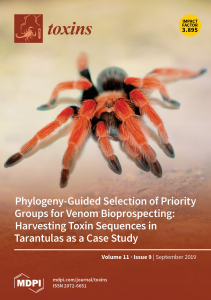 Spiders are the most successful group of venomous animals and their venoms may yield up to 10 million bioactive components. However, from this large biological-library only a marginal fraction of 0.02% has been discovered. A major obstacle in this context is the taxonomic bias towards dangerous and large species. In this work, recently published in “Toxins” I propose a taxon selection approach that is based on phylogenetic distance and demonstrate it using tarantulas as a model group. My colleagues and I discover that even within this family a variety of lineages remains fully unstudied for their venom and that prevailing assumptions on tarantula venoms are made from knowledge of only an unrepresentative subset of tarantula lineages.

The evolution of tarantulas and their urticating hairs 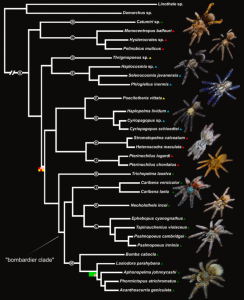 Catching up on my previous work on tarantula evolution, I joined forces with Saoirse Foley and further illuminated the evolutionary history of large, fuzzy spiders. In our paper, in which we shared the lead authorship, that has been published in “Molecular Phylogenetics and Evolution” we used a core ortholog approach to infer a tarantula phylogeny from almost 3 million basepairs of sequence data. We find, that tarantulas of the neotropics belong to a single, highly species-rich clade. Some members of this clade carry urticating setae as a means of defence besides their ability to deliver a venomous bite. We studied the evolution of these setae and found they seemingly evolved via convergent evolution. We argue, that urticating setae represent a key innovation for tarantulas of this clade and that the evolutionary interactions of setae with venom may explain the rapid diversification within the neotropics. 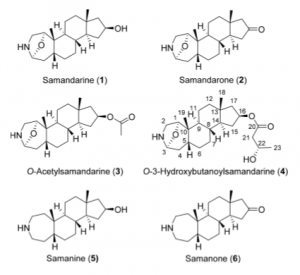 In our recent paper, published in the prestigious “Journal of Natural Products”, my colleagues and I describe a semi-preparative technology along a non-invasive sampling process allowing for the isolation of salamander-alkaloids from poison of fire salamanders (Salamandra salamandra). Thereby we stumbled upon two novel derivatives of these lethal neurotoxins and elucidated their structure by mass spectrometry, optical rotation measurement and nuclear resonance spectroscopy. These two, O-3-hydroxybutanoylsamandarine and Samanone, represent the first new described salamander-alkaloids since the 1960s and are the first of their kin isolated in the 21st century!

Are salamanders lying about their toxicity? 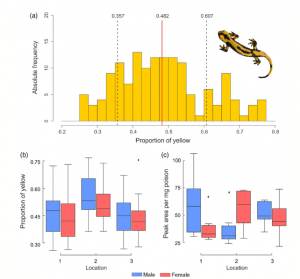 In a series of experimental studies, led by Eugenia Sanchez and Kathleen Preißler, we investigated the signal honesty of fire salamanders (Salamandra salamandra) by chemical analyses of skin poison in tandem with optical modelling and spectrometric quantifications. We found that fire salamanders are indeed aposematic and that the internal contrast between yellow and black makes them highly conspicuous towards snake and bird predators. That said, we did not find the expected correlation between conspicuousness and toxicity. Moreover we found that the percentage of yellowness in fire salamanders does not correlate with alkaloid content but with sex. We propose that the warning coloration of fire salamanders may be primarily driven by sexual selection instead by predator-prey interactions. 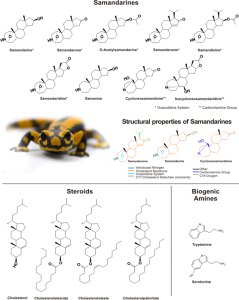 In our recent review article, published in “The Science of Nature”, my collaborators and I have summarized the state of the art regarding the toxinology of true salamanders, genus Salamandra. Although the toxic secretions of this genus, were extensively studied in the early days of natural compound chemistry most of the obtained information was hidden to a broader scientific audience since it has almost exclusively been published in German language. Our article is meant to spread all necessary informations on Salamandra toxins to the respective researchers in the field and furthermore it identifies research priorities for future work. The paper has recently made the rounds on social media and was selected as the highlight article of the current issue of the journal. It has therefore been featured on Springer Animal Sciences.

A first molecular perspective on the tarantula tree of life 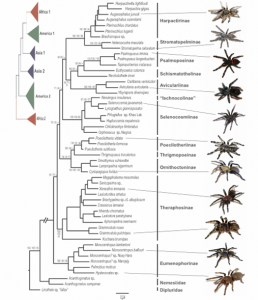 After two years of work we finally published our first paper on tarantula evolution in “Molecular Phylogenetics and Evolution”. Tarantulas, or scientifically speaking Theraphosidae, are amongst the largest and most famous spiders on earth. Unfortunatelly their taxonomy is still mostly founded on morphological data only so far and remains therefore highly controversial. In this study – of which I had the honour to be the lead author- we reconstructed the first molecular data based hypothesis on the evolution of tarantulas. We developed several new primers for future molecular studies on tarantula evolution and discuss the validity of several problematic lineages within this fascinating spider family.

Me speaking at #weknowhow podcast

Listen to me at Deutschlandfunk Nova Hörsaal Podcast